On May 30, 2019, FASB issued Accounting Standards Update (ASU) No. 2019-06, Intangibles—Goodwill and Other (Topic 350), Business Combinations (Topic 805), and Not-for-Profit Entities (Topic 958): Extending the Private Company Accounting Alternatives on Goodwill and Certain Identifiable Intangible Assets to Not-for-Profit Entities, which extends to all nonprofits certain simplifying accounting alternatives previously offered only to private companies. When the private company guidance was issued in 2014, the Board acknowledged that the issues of cost and complexity addressed by the private company accounting alternatives could apply to other entities, including not-for-profit entities (NFPs), and added this project to its agenda. The amendments in this Update extend alternatives to NFPs that reduce the cost and complexity associated with the subsequent accounting for goodwill and the measurement of certain identifiable intangible assets acquired without significantly diminishing decision-useful information for users of not-for-profit financial statements.

ASU 2019-06 permits all NFPs to elect the accounting alternatives described in ASU No. 2014-02, Intangibles – Goodwill and Other (Topic 350): Accounting for Goodwill and ASU No. 2014-18, Business Combinations (Topic 805): Accounting for Identifiable Intangible Assets in a Business Combination. Under the new standard, NFPs are no longer precluded from amortizing goodwill. If they elect the accounting alternative in Topic 350, they can amortize goodwill on a straight-line basis over 10 years (or a shorter period if more appropriate) and would have to elect an accounting policy for impairment testing at either the entity or reporting-unit level. This simplification allows nonprofits to test goodwill for impairment based on a triggering event, instead of annually.

The standard permits revisions to remaining useful lives of goodwill after the initial selection when warranted; however, the cumulative amortization period for any amortizable unit cannot exceed 10 years. The amortization of goodwill will be presented in the statement of activities and included in the functional allocation of expenses. Any impairment losses would be recognized in the statement of activities under continuing operations (or similar caption) unless the loss is associated with a discontinued operation.

Under the accounting alternative in Topic 805, certain identifiable intangible assets (those meeting either the separability criterion or the contractual-legal criterion) obtained in an acquisition of another entity or operation will be included in goodwill instead of being accounted for separately. This simplification allows nonprofits to recognize fewer items as separate intangible assets in an acquisition. Contract assets, as described under Topic 606 on revenue from contracts with customers and leases are not considered identifiable intangible assets for the purposes of this alternative. 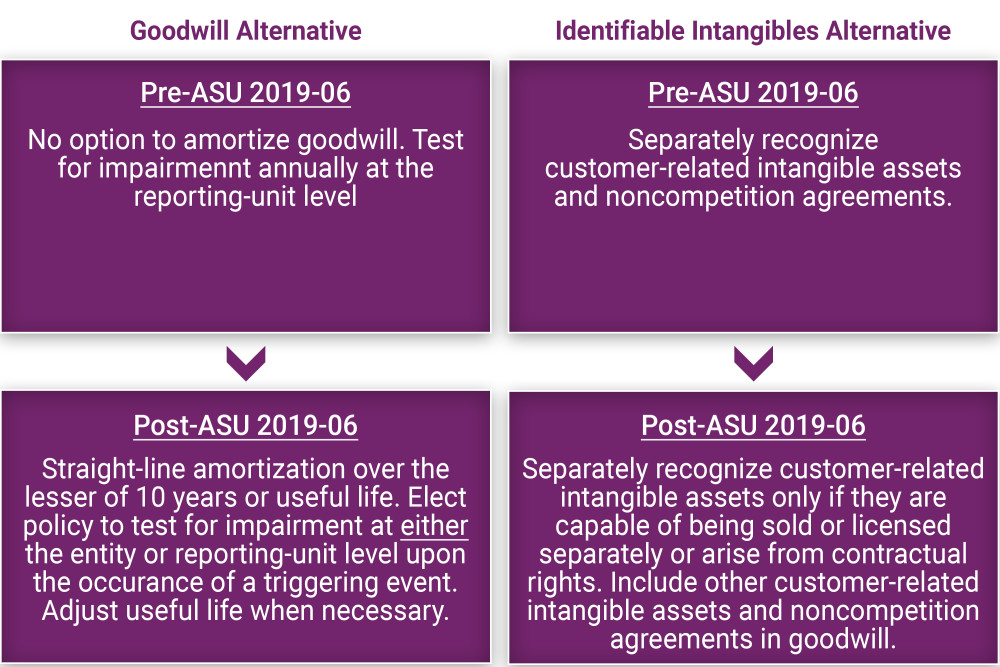 ASU 2019-06 is effective upon issuance. NFPs electing to adopt these alternatives do not have to demonstrate preferability and should follow the transition guidance the first time they elect to adopt the alternatives. They have the same open-ended effective date and unconditional one-time election that private companies have. If the entity elects the Goodwill Alternative, it is applied prospectively to all existing and new goodwill after the effective date. The Identifiable Intangibles Alternative is applied prospectively when the first transaction that falls within the scope of the alternative occurs.

Read the ASU for detailed information and commentary.

What did you think of this?

Mentioned in this article